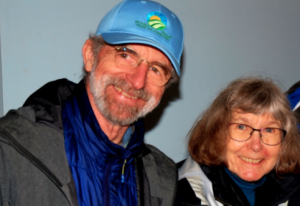 Felicite Stairs and Dan McCarthy are starting a new chapter in British Columbia and the Ottawa Valley Food Coop is going to miss them..

Felicite sat on the Board from its beginning in 2008 until 2013. Dan followed in 2013 and became president in 2015 till this past June of 2020. They have been dedicated volunteers and leaders in the OVFC, bringing their law skills, their environmental and social justice values as well as their many people and church connections. Dan coordinated the Arnprior/Ottawa delivery route and has been the central driver for this route as well as his Board duties. Both Felicite and Dan could be counted on to come and sort whenever needed. As a fellow Board member and Volunteer Coordinator, Lynne Epps wants to thank Dan and Felicite for their commitment, their level heads, their humour, and their friendship. They leave a huge gap in our volunteer roster. No doubt they will jump into their new community with both feet. We wish them all the best.

I just love the down to earthiness of all the people and the food here! This is an honest to goodness revolution, and it’s happening in our pantries and in our browsers… a must for the socially conscious gourmet or those who just plain love to eat!